During a recent clear up in the Churchyard John Hurcombe came across a few ‘lost graves’. Lain hidden amongst weeds and shrubs was this one which bears an interesting inscription. 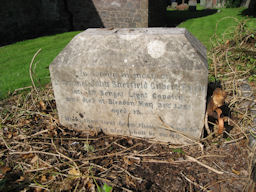 Research has indicated that this regiment was only in existence during the Indian Mutiny, being disbanded shortly afterwards.

I am wondering if there are any descendents of this officer still living in the area, and to that end I am posting this on the website in the hope that someone somewhere can provide some clues as to his military career before he ended his days in Bleadon please e-mail me.

Mr Frank Barton of Cambridge has asked me to post this on our website in a hope that someone will recall the incident. His father was the pilot. If you do have any information perhaps you could let me know so that I may pass it on to him. (01934 814142)

At 19.57 hrs on June 6th 1941 two Spitfires of a patrol protecting a convoy in the Bristol Channel passed over the barrage area operated by No.955 Squadron at Weston super Mare. The rearmost aircraft, P8143 of 501 Squadron operating from Colerne, hit the cable of the balloon at Site 55/19. The Double Parachute Link fired and the balloon broke away, but the aircraft crashed at Shiplate Court Farm, Hutton. The pilot, Sgt. C.J.Barton was killed and the aircraft burnt out.

A collection of old photos of Bleadon (and some of its inhabitants) has been put on a DVD. Price £6.50. P&P will be extra.Please email Penny Robinson for further details.Do you recognise anyone from the old photos in our collection? 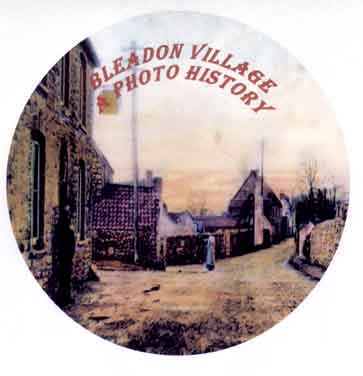 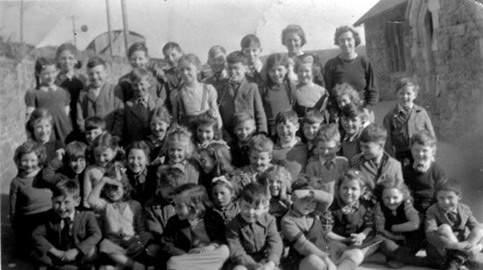 The skeleton of "Bleadon Man" was found in 1997 during an archaeological excavation necessary before consideration of planning permission for a proposed building development adjacent to Whitegate Farm Bleadon. The investigation revealed that "Bleadon Man" was probably a farmer and about 50 years old when he died over 2000 years ago. DNA testing confirmed that four people living in the surrounding area were related to this Iron Age man. 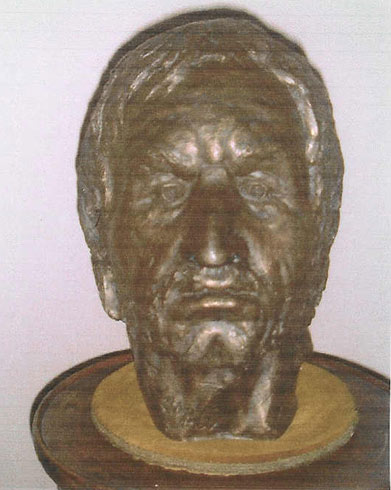 The University of Manchester Medical School through its leading experts in facial reconstruction created a cast of the head of "Bleadon Man" and the bronze resin head pictured here was created from this. This head was unveiled in December 2000 as the Bleadon Coronation Hall's millennium project and remains on permanent display in the Hall along with additional pictures of the archaeological dig.

"Bleadon Man" was first shown on the BBC series entitled "Meet the Ancestors". The skeleton and a second bronze resin head are displayed in the Wellcome Wing of the National Museum of Science which was opened in June 2000 by Her Majesty the Queen. Reference: BBC publications - "Meet the Ancestors". Julian Richards 1999.

These are some of the photographs taken at the time of the dig showing the overall site, the arrangement of the graves and the 'Bleadon Man' in situ. (Photos Penny Robinson). 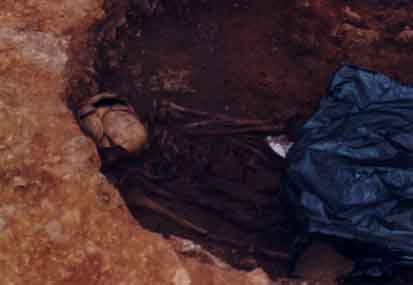 The River Axe and the Tale of Edwin Clogg

Walking alongside water on a sunny day is a very relaxing and pleasant experience. It is a pity therefore, that although the southern boundary of our parish for about three miles is formed by the River Axe. only two relatively short stretches of it are accessible to the public.

To the west of the A370 you can walk, high tide permitting, from Bleadon Bridge across two fields to the back of the Purn Caravan Park, then across one more field to the track that leads to the first bend in Accommodation Road (from which it is but a short step to the Anchor and Catherines Inn). Also from Bleadon Bridge you can follow the river on the south side in the opposite direction as far as the bridge near South Hill Farm and then having crossed the Bridge, on the north side for a short distance before turning left to the farm. Both walks offer interesting perspectives of the village and the Mendips. but if you want further official access to the river you have to join an angling club. To me the bridge by the farm, known to generations of local boys as the Cow Bridge and a favourite jumping-off point in summer, has a unique point of interest that brackets Bleadon with Newcastle-upon-Tyne and Sydney, Australia. It was built in the I930's by Donnan Long, the company that built the somewhat larger bridges in those world famous cities.

Unfortunately, there is also a very sad tale to tell about our local stretch of river. You can find the memorial to it in our Churchyard, just behind the Kathleen Beeby Memorial garden: the grave of Edwin Clogg. who died in July 1957 aged 71 years. At the head of the grave are the words "A life given for another".

Edwin's story was told me by Ken Durston, who was born in Bleadon 1927. From his earliest years Ken remembers Edwin as an established resident, living alone in a small wooden building at the top of the land belonging to The Mount in Shiplate Road. It seems likely he had arrived there after World War One, when he had been a conscientious objector. The owner of The Mount, Bert Over, was a fellow objector and there appears to have been another idealistic strand to the story in that close to Edwin's hut was another in which courses in Esperanto were held. There were fruit orchards and strawberry fields at The Mount and when the weather was fine the local children used to help with the picking under the supervision of Edwin and Bert. They would also take the children swimming in a shallow part of the Axe between the sluice and the Cow Bridge, to cool off after their labours. They were joined in the summer holidays by underprivileged boys from Bristol, who were accommodated in a hutted camp at Barton (between Webbington and Winscombe). These boys were transported in a huge Studebaker owned by Bert's sister and garaged by Roy Goodall, who also provided a driver.

I suppose that nowadays we would say it was an accident waiting to happen. On that July day in 1957 a Bristol boy got into difficulties. Edwin tried to save him, but could not and both were drowned. There was evidently great sadness in the Village with local people collecting money to provide a handsome gravestone. This is what we can see today in the Churchyard.